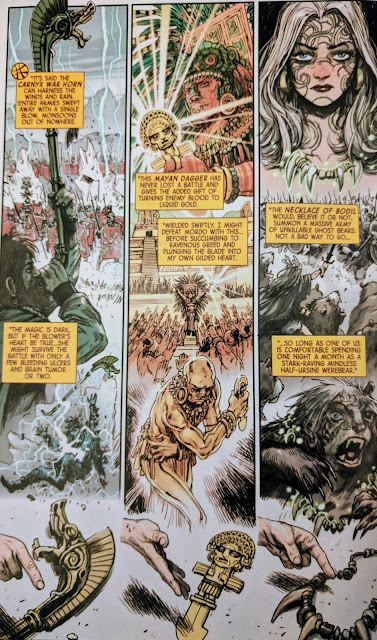 Stats: Hold high in the air and blow to activate. Functions the same as Cleric spell "Weather Control" at the 36-37 level which allows the user to create storms, hurricanes and target lightning bolts (10d6 damage). Every round the user wants to alter the effect they must blow the horn which requires a stamina check at a -2 penalty if performed two or more turns in a row. If the stamina check is failed, the weather continues on as it was previously ordered and the user cannot target lightning. Additionally, each round (starting at DC 10) the user of the horn must make a will save or be struck by lightning. Each round that the horn is used to affect the weather (regardless of whether the stamina check was passed) the bearer of the horn receives a cumulative -1 penalty to their will save.

The "Mayan Dagger" Is super-good in some non-specific way (maybe it inspires fanaticism?), but turns enemy's blood into gold.

A perfect murder hobo weapon if there ever was one, except for the fact that it makes its wielder so lustful for gold that they eventually consider killing themselves with it. I like the idea of a slain enemy's blood being turned into gold while leaving the flesh and bone unchanged. That way if the characters really want that gold, they'd have to dig and cut it out., which I imagine could be tedious as well as a little grisly.

Stats: Typical dagger does 1d4, so let's assume this dagger is extra special and say it does 1d6+3. Makes the bearer immune non-magical attacks unless the attacker is 5HD or more. Allies fighting along side the bearer gain +1 to all attacks, damage, and saves as well as an additional 1HD worth of hit points appropriate to their class. Worshippers of [Insert name of an appropriate god of war/greed/etc...] fighting along side the bearer gain an additional +3 to attacks, damage and saves.

The dagger is intelligent (Int. 15), chaotic, and has the special purpose of creating and acquiring as much gold as possible. Every day, if the bearer has not transmuted or collected gold totaling 5000 GP or more they must make an ego check against the dagger's intelligence or immediately attack the nearest creature(s) until enough gold has been created. If there are no other creatures available, the bearer must plunge the dagger into their own heart and die. After it's first use, the bearer of the dagger requires a DC 20 will save to use a different weapon. Discarding the dagger or giving it away (or allowing it to be taken) requires a DC 25 will save with a -1 for every 10,000 GP the character has transmuted or acquired.

The Necklace of Bodil lets you summon an army of spectral bears! Unfortunately, it also turns you into a werebear.

Stats: The wearer can burn any combination of stamina and willpower to summon d100 spectral bears per point spent. The wearer must resolve how many points to spend in this way before activating the talisman. When the battle is complete, rather than returning to the afterlife (bear afterlife?), the bear spirits make a home in the body of the creature that summoned them. This causes the wearer of the necklace to become a crazed bear monster with its strength determined by the number of crazed bear spirits sharing their body (see table below). 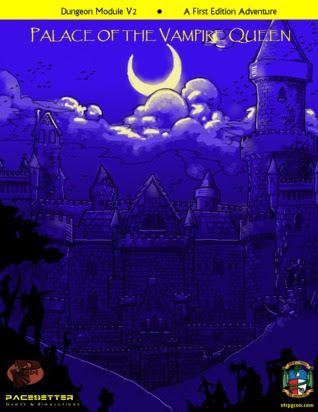